John H. Johnson is a familiar name to nearly every African-American family. As the founder of Johnson Publishing Company, publisher of Ebony and Jet magazine, his publications were in nearly every African-American household in America. His vision to provide news and stories relevant to black people made him one of the most significant businessman and publisher of United States.

John Johnson was born in 1918 in Arkansas.  His father died when he was six years old in a sawmill accident.  Due to lack of educational (there was no black high school in his town) and economic opportunities in Arkansas during the Great Depression, his family moved to Chicago, Illinois.

In Chicago, Johnson attended DuSable High School.  Du Sable was in the South side of Chicago and was attended by middle-class blacks, who proved a stark contrast to Johnson’s ragged clothes and country ways. Despite their teasing and taunts, Johnson excelled academically:  he was an honor student, member of the debating team, managing editor of the school newspaper, business manager of the yearbook, and student council president.

After high school, Johnson went to work at Supreme Life Insurance Company.  Harry Pace, the President of Supreme Life Insurance, met Johnson at an Urban League dinner and offered him the job as well as a scholarship to the University of Chicago.  While working for Pace, Johnson’s role required him to collect articles culled from national magazines.  Noticing that the magazines were utterly devoid of black voices he dreamed of a magazine  with current events of interest to blacks could be published and sold to African-Americans as a group, the way Reader’s Digest reached its audience.

In 1942, he founded Johnson Publishing Co. and set out to publish his first magazine, Negro Digest.  Unable to find a bank that would lend him money for his business, Johnson used his mother’s furniture as collateral to borrow $500.  He then used that $500 to mail out offers to thousands of Supreme Life’s policy holders for charter subscriptions at $2 annually.  This gave him $6000 with which to publish his new magazine.  With this capital and marketing assistance from Joseph Levy (a magazine distributor), Johnson was able to grow his circulation to 50,000 in six months. Three years after his successful first publication started, Johnson created Ebony magazine.  Ebony showed that blacks led successful middle-class lives, which played a major role in convincing white corporations to advertise in the black media.  Ebony was also the first publication to use black models in ads and articles, and through meticulous market research Johnson was able to prove to white advertisers that black consumers responded to black models better. The magazine initially focused on rich and popular people in the African American community, but also included issues like “the white problem in America”, African American militancy, crimes by African Americans against African Americans, civil rights legislation, freedom rides and marches, and other aspects of segregation and discrimination.

Because Johnson’s magazine had literally no other competition, it became a hit in every black middle class household.  Ebony brought Johnson substantial ad revenue, and in 1951 he created Jet magazine, a pocket sized weekly magazine that highlighted news of African-Americans in the social, political, entertainment, business and sports worlds.  Jet magazine is notable for its role in chronicling the Civil Rights Movement from its earliest years, including coverage of the Emmett Till murder, the Montgomery Bus Boycott, and Martin Luther King Jr (who also  wrote an advice column for Ebony in the late 1950s).

Aside from his well-known publications  Johnson created the Ebony Fashion Fair in 1958, a venture overseen by his wife, Eunice.  In 1973, they launched their makeup company, Fashion Fair Cosmetics.  Johnson Publishing Company also owns Mahogany Travel, WJPC-AM radio in Chicago, considerable real estate, and a 20 percent stake in Essence, a popular black women’s magazine.  In 1982, Johnson became the first black person to be named one of Forbes’ 400 richest Americans, with an estimated net worth of $150 million.  In 1987, Black Enterprise named Mr. Johnson “Entrepreneur of the Decade.” 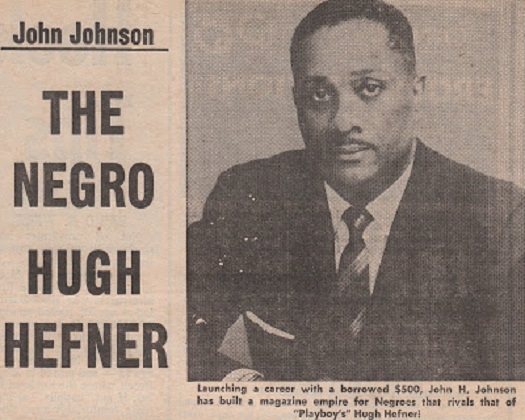 Keeping the business in the family, Johnson named his daughter Linda Johnson Rice CEO of Johnson Publishing Company in 2002.  He continued on as chairman and publisher until his death from heart failure on August 8, 2005.  After his passing, Johnson was given a send-off fit for a world leader, his body laying in state for a time at the Johnson Publishing Company’s Chicago headquarters.  More than 1,000 people attended his funeral, including activist Al Sharpton, politician Carol Moseley Braun, ex-President Bill Clinton, and future U.S. President Barack Obama.  Before his death, Johnson was asked how he wanted to be remembered.  His reply was that “I want them to say he had an idea and that he believed in it and that he refused to accept failure in pursuit of it.”  Johnson was survived by his wife, Eunice, by his daughter, Linda, and by the powerful publishing empire that he created. One thought on “Black History Month: Day 16 – The Man Who Told Our Story”