I thought about omitting this entry into the Travelbox History Corner, but recent events changed my mind.  Though Emmett Till was not the first victim of racist terrorism in the American south, but his murder galvanized the Civil Rights Movement.

While visiting family in Money, Mississippi, 14-year-old Emmett Till, an African American from Chicago, was brutally beaten and murdered for the crime of offending a white woman.  His killers, J. W. Milam and Roy Bryant, were charged for his murder but never convicted, despite confessing to the murder after the trial.

Despite becoming the horrifying symbol of victims of racial terror in America, Emmett Till was just a boy. Emmett was born on July 25, 1941 in Chicago, Illinois. He was Mamie Till’s only child, and she raised him as a single mother after she separated from his father. Mamie worked long hours as an Air Force clerk, but was able to provide for little “Bobo” (Emmett’s nickname) as he grew up on Chicago’s South Side. Emmett shares a connection with charismatic chairman of the Illinois chapter of the Black Panther Party Fred Hampton: Fred’s mother used to babysit young Emmett. Emmett was known an infectiously high-spirited child who was always telling jokes and trying to make people laugh. He also handled the responsibilities of their household while his mother worked: cleaning, cooking and even doing the laundry.

In August of 1955, Emmett’s great uncle Mose Wright visited Emmett and his mother from Mississippi. In order to visit with his cousins, Emmett begged his mom to let him go with his Uncle Mose back to Mississippi. Mamie was wary of letting her son visit in the South without her, but eventually she agreed to it. On August 20th, she drove him to the train station and Emmett boarded the southbound train to Money, Mississippi. It was the last time she saw him alive. 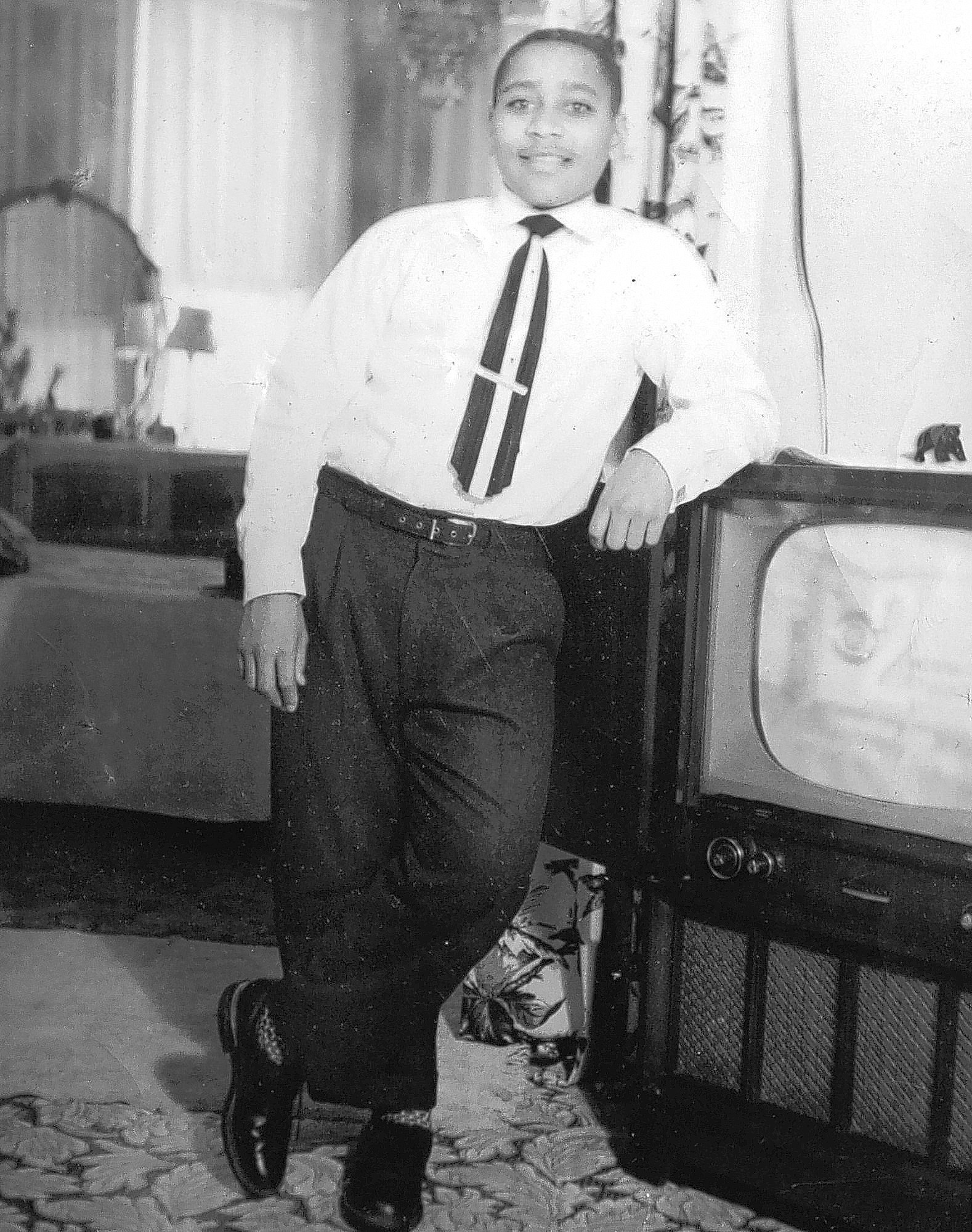 Emmett Till, as old as he’ll ever be. Credit, Chicago Tribune.

On August 24th, Emmett headed to Bryant’s Grocery and Meat Market with several other teenagers for refreshments after a long day of picking cotton in the hot sun (the community was full of farms and sharecroppers). The store was owned by Roy and Carolyn Bryant, a white couple.  While buying some candy, Emmett allegedly whistled at Carolyn Bryant.  According to Bryant, Emmett had “grabbed her, made lewd advances, and then wolf-whistled at her as he sauntered out.”

Much, much later Mrs. Bryant admitted that her alternative account of their encounter was false. Regardless, her lies had a deadly effect on Emmett and his family.

Knowing that there might be trouble at the perceived slight, the boys hurried out of the store and out of town.  When Mrs. Bryant later told her husband Roy what happened, he and his brother hunted down Emmett and invaded his uncle Mose’s house just four days later to kidnap 14 year old Emmett. 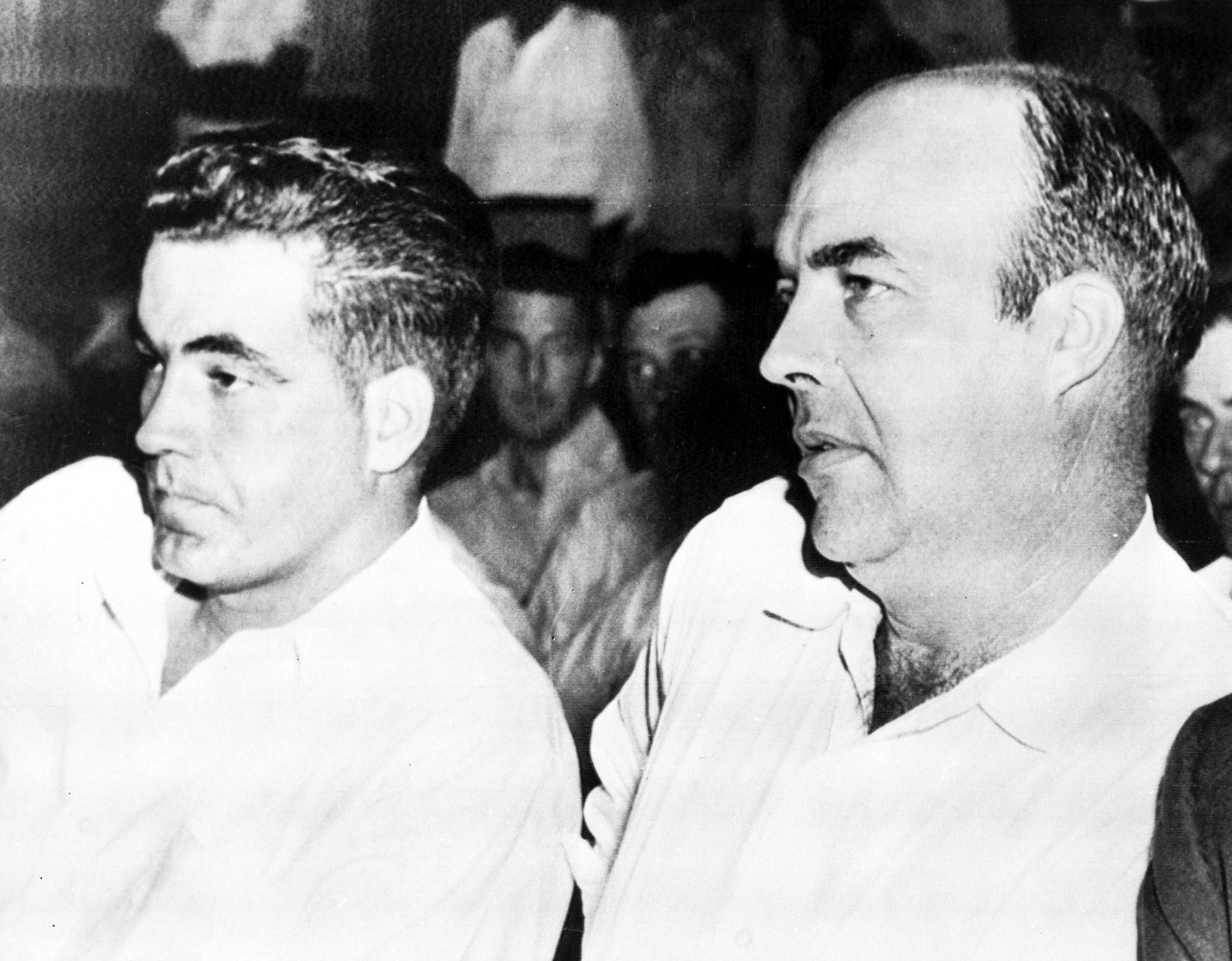 On August 28, Roy Bryant, along with his wife, and half-brother J. W. Milam tied up and loaded the teenager into the back of a pickup truck. While driving back to the store the men pistol whipped the boy, adding several more accomplices to their lynching squad to help “make an example” of Emmett. According to Bryant’s and Milam’s own telling, they planned to “just whip him…and scare some sense into him.”

The assailants drove Till 75 miles throughout the night in search of a cliff to throw him off of, but eventually brought Till to a barn on J.W.’s brother farm. Over the course of several hours they beat Emmett bloody and unrecognizable, gouging out one of his eyes during the night. Next, they brought him to the bank of the Tallahatchie River, stripped him naked, and shot him in the head with a .45 caliber pistol.  After killing him, they tied his lifeless body to a 75-pound cotton-gin fan they stole earlier and threw him into the river.

Emmett Till, before and after.

Three days after his abduction, Till’s swollen and disfigured body was found by two boys fishing in the Tallahatchie River.  The FBI report on the incident states the following:

His head was very badly damaged. He had been shot above the right ear, an eye was dislodged from the socket, there was evidence that he had been beaten on the back and the hips, and his body weighted by the fan blade, which was fastened around his neck with barbed wire. He was nude, but wearing a silver ring with the initials “L. T.” and “May 25, 1943” carved in it.

Till’s body was shipped to Chicago. His mother opted to have an open-casket funeral displaying Till’s body in order to “let the world see what has happened, because there is no way I could describe this.” Thousands came to view the body.  Jet magazine as well as The Chicago Defender published the graphic images of Till’s mutilated corpse. The damning photos helped an entire nation, and possibly the world, realize the extent of the racial violence of the South.

In Mississippi, however, the all-white, all-male jury (women and blacks had been banned) who heard the case took 67 minutes to deliberate and find Bryant and Milam not guilty.  The jurors felt that although the crime was severe, life imprisonment or the death penalty were not a fit punishment for whites who had only killed a black child.

Newspapers in major international cities and Catholic, Protestant, Jewish, and socialist publications were furious about the verdict and very critical of American society. On the other hand, Southern newspapers, particularly in Mississippi, were satisfied that the court system had done its job.

Why was such a brutal attack condoned in the United States? In the American South, lynchings and other forms of extrajudicial mob justice against African Americans were considered normal.  Violence and terrorism were justified by the majority white public “if the negro forgot his place.” Since 1882 (when statistics were recorded) at least 500 African-Americans were murdered by white terrorists in Mississippi alone.  Taking in other southern states, the numbers ranged in the thousands.

Post World War II, race riots and racial murders spiked when Presidential executive orders would desegregate the armed forces.  During this time, many Black veterans were killed by white citizens for rejecting the Jim Crow laws and rules of “segregation and order” that maintained this country’s racial caste. Many of these Black veterans of war felt that serving their country was a badge of honor worthy of equality. But as is true now, white supremacy was much too pervasive for their equality to be recognized.

One silver lining (if it can be called that), is that this history of racial violence, white indifference, and the shared photos of Emmett Till’s open casket would provide the spark to ignite the 20th Century American Civil Rights Movement. In December of 1955, Rosa Parks was motivated by Emmett Till’s loss when she told a Montgomery Bus Driver that she would not move from her seat.  Days later the Montgomery Bus Boycott began a campaign that would help to create The Civil Rights Act of 1957.

The Civil Rights Act of 1957 ensures that the U. S. Department of Justice can intervene in local law enforcement when civil rights are being violated.  It gives the Attorney General and his office the mandate and responsibility to step in when local authorities aren’t protecting the rights of American citizens.  To this day, Americans must remain vigilant to the type of racial indifference and violence Emmett Till and thousands of African Americans suffered from.

“The Death of Emmett Till.” History.com, n.d. Web. 10 February 2017. http://www.history.com/this-day-in-history/the-death-of-emmett-till.

2 thoughts on “Black History Month: Day 10 – The Brutal Murder of Emmett Till”