I’ve been watching a lot of Star Trek recently.  One reason is because every other weekend I volunteer at Seattle’s MoPOP, where I have the honor of talking to people about the amazing Star Trek: Exploring New Worlds exhibit.  The other reason is because it’s never failed to inspire me to embrace a future where the people of Earth move past our differences in order to ascend to the heavens and beyond.

When Gene Roddenberry first created Star Trek, his goal was to bring a diverse cast to television during a time filled with Cold War paranoia and Civil Rights protests.  Central to his initial cast, and to history as we know it was an absolutely beautiful singer and dancer from Chicago named Nichelle Nichols.  Her name meant “victorious maiden,” and through her portrayal of Lt. Uhura on Star Trek she inspired many Americans to reach for the stars.

Prior to Star Trek, Nichelle was first discovered by the great Duke Ellington.  Though only 15 years old, The Duke hired her to choreograph and perform a ballet for one of his musical suites and tour with him as lead singer.  After the tour, she continued to work as an actress, singer, and dancer in a series of plays and musicals in Chicago, New York, and Los Angeles.  She also toured with Lionel Hampton’s band in the U.S. and Europe.

She made her film debut in 1959, as an uncredited dancer in a film adaptation of the opera Porgy and Bess starring Sidney Poitier, Dorothy Dandridge and Sammy Davis Jr.  She also had several television appearances, notably on a series directed by Gene Roddenberry called The Lieutenant.  The two became close, and years later when Roddenberry began casting a science-fiction television series to be set in outer space, he invited Nichols to audition.  Spoiler alert: she got the part.

Nichelle Nichols on the cover of Ebony in 1967.

The role of Lt. Uhura on Star Trek was notable as one of the first non-stereotypical roles on television played by an African-American actress.  The character’s name came from the Swahili word uhuru, meaning “freedom.”  Lt. Uhura was a translator and communications officer who specialized in linguistics, cryptography, and philology. Her role on the helm of the U.S.S. Enterprise was integral to its mission.  Her presence as an equal to her crew members, regardless of race or gender, was as strong a symbol of freedom as you could get during the show’s run in the 1960s.  Plus, she made history along with William Shatner in Star Trek’s third season when they shared the first interracial kiss shown on American television.

As a cast member of Star Trek, Nichols stood out as one of the only black females regulars on a TV show not in a stereoptypical role. Rather than a maid or housewife, Lt. Uhura was a translator and communications officer who specialized in linguistics, cryptography, and philology.  In layman’s terms, that meas she spoke all of the languages, and new enough to pick up alien languages she didn’t know.  This role inspired many people throughout the years, including president Barack Obama, the actress Whoopi Goldberg,  and even astronaut Mae Jemison.  Both Goldberg and Jaemison went on to have roles on Star Trek: The Next Generation. 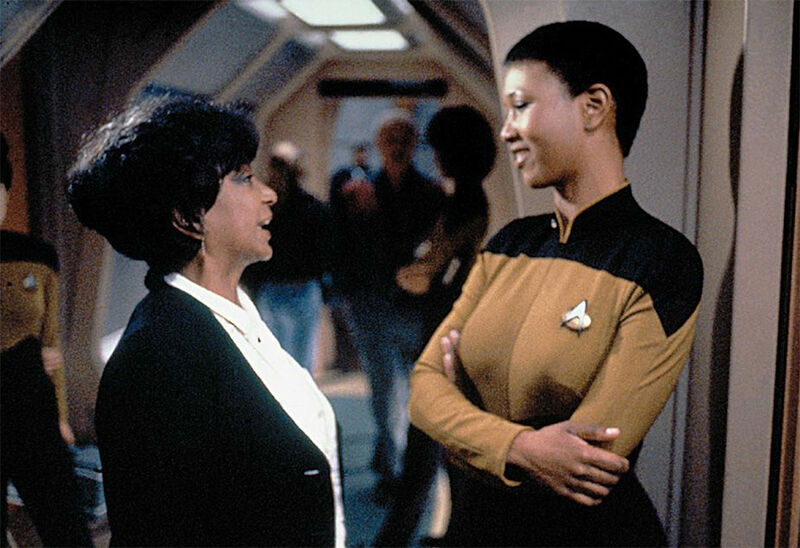 Astronaut Mae Jemison and Nichelle Nichols, on the set of Star Trek: The Next Generation.

Nichols role was also an inspiration for Dr. Martin Luther King Jr, who told her that Star Trek was the only show he and Coretta allowed their little girls to stay up and watch.  In fact, Nichols met him at an NAACP fundraiser at a time she was considering leaving the show to return to Broadway.  Dr. King urged her to stay, telling her how important it was for the world to see a black woman as an equal to the rest of her mostly white male crew.  His words helped her decide to continue with Star Trek (and without them it may not have continued to be such a classic).

After 3 seasons Star Trek was cancelled.  It’s legacy, of course continued on, as did Ms. Nichols.  After the cancellation of Star Trek, Nichols volunteered her time for a special project with NASA to recruit minority and female personnel. The project began as an affiliation between NASA and a company which she helped to run, Women in Motion.  Among those recruited were Dr. Sally Ride, the first American female astronaut, and United States Air Force Colonel Guion Bluford, the first African-American astronaut.  She also helped recruit Dr. Judith Resnik and Dr. Ronald McNair, who both flew successful missions during the Space Shuttle program before their deaths in the Space Shuttle Challenger disaster.  Nichols continued to be involved with NASA throughout the years, as well as serving on the board of governors for the National Space Society.

Nichelle Nichols has continued to appear in various television and film roles, returned to singing, and in 1994, she published her autobiography Beyond Uhura: Star Trek and Other Memories. She has also written two science-fiction novels, Saturn’s Child and Saturna’s Quest.  She was awarded her much deserved star on the Hollywood Walk of Fame in 1992.  Beyond the stars, Asteroid 68410 Nichols is named in her honor.

Nichelle Nichols being honored on Hollywood’s Walk of Fame.

Nichelle Nichols is a historical icon because she helped create the image of racial equality on television, and took that as inspiration to make it happen in real life.  And did it with style, grace, and beauty.

One thought on “Black History Month: Day 25 – The Woman Who Showed Us the Stars”