First and foremost, I know that Black History Month was over, but I dedicated myself to do 28 posts about Black History, so I’ve got 6 more posts to do.  Secondly, rather than provide a summary, I decided to switch it up for the last few posts.

It may or may not be common knowledge, but Crispus Attucks was in fact the first American casualty of the American Revolutionary War. He is credited as the first American to die during the night of the Boston Massacre, an event where British soldiers fired upon a group of Bostonians after being pelted with “snowballs and debris.” For anyone who doubts this, I give you a history lesson from Stevie Wonder:

Coincidentally, John Adams, who would later become America’s 2nd president defended those same British soldiers from death. This would also be the first time in American History (and definitely not the last) that officers would receive a lighter sentence because their victim was colored. Nonetheless, today is for honoring a fallen patriot. 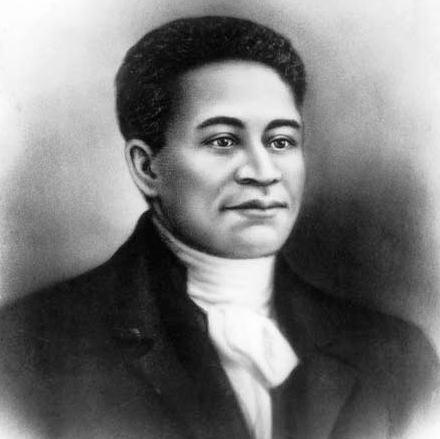 A “Mulattoe man, named Crispus Attucks, who was born in Framingham, but lately belonged to New-Providence, and was here in order to go for North Carolina . . .” – The Pennsylvania Gazette, apparently.

Crispus Attucks is thought to have been born around 1723 in Framingham, Massachusetts. As a young man, he showed an early skill for buying and trading goods. Attucks spent most of his life on trading ships and whaling vessels coming in and out of Boston. He also found work as a rope maker. Being out on the seas and in Boston, he would have been privy to all manner of British harassment, as officers had the ability to impress seamen against their will into service with the British Navy. British sailors also took part time work away from Americans such as Attucks. To say the least, Crispus shared the sentiment of other Bostonians that the British were not welcome.

On March 5, 1770, the night of the Boston Massacre, Attucks was a part of a crowd that confronted several British soldiers who had struck a kid for complaining that they didn’t pay their barber bill. As the crowd grew, Attucks and several other men approached the soldiers with clubs and threw snowballs, ice, coal and oyster shells at the British troops. Additional British soldiers from the 29th Regiment of Foot were called, and after one soldier allegedly caught a piece of wood to the face they opened fire on the crowd. Five Americans were killed and six were wounded in what came to be called the Boston Massacre. Attucks was the first one killed, taking two bullets to the chest.

The headstone at the grave of the victims of the Boston Massacre. As a man of color, it was very rare to be buried along whites.

We may not be able to say conclusively that Crispus Attucks died fighting for the idea of an independent nation. But what is clear is that Crispus Attucks was fed up with the way he and his countrymen were treated, and decided to take matters into his own hands. Attucks reacted to protect his home and his people, and he is generally considered the leader and instigator of the event. Because of this, Attucks can be credited as starting the American tradition of “not putting up with your shit, George,” and uniting against a common enemy. Three years after Attucks took the first shot for American independence, John Adams’ second cousin Samuel would become a major figure in the Boston Tea Party incident. Without Crispus Attucks’ example, Samuel Adams and the other guys who dressed up as Natives to dump tea into the harbor may not have had the stones to do so. Crispus Attucks’ courage helped determine the course of history.