Elijah J. McCoy was a Canadian-American inventor and engineer who was notable for his 57 U.S. patents, most having to do with the lubrication of steam engines. In 1872 he designed a “lubricating cup” that distributed oil evenly over an engine’s moving parts. Though other inventors made an effort to sell their own models of this device, most engineers asked for “the Real McCoy” in order to avoid inferior copies.

Elijah J. McCoy was born on May 2, 1844, in Ontario, Canada. His parents were fugitive slaves that had escaped from Kentucky via the Underground Railroad. In 1847 they returned to the United States and settled in Michigan. At a young age, McCoy showed a strong interest in mechanics. By 15, his parents sent him to Edinburgh, Scotland for an apprenticeship in mechanical engineering.

McCoy returned to Michigan after the end of the American Civil War. Due to racial barriers, McCoy was unable to find work as an engineer in the United States. Since African Americans were not considered for skilled professional positions, McCoy worked as a fireman and oiler for the Michigan Central Railroad. His role required him to shovel coil onto the fires for steam engines, and to oil the train every few miles to ensure the axles and bearings were properly lubricated. Because the train had to stop in order to be oiled, it was very inconvenient that railroad engines could not lubricate themselves.

Bored from the lack of stimulation provided to a trained engineer, and motivated to boost efficiency and overcome the repeated halting needed for lubrication of the train, McCoy came up with a method of automating the task. In 1872 he designed a “lubricating cup” that could routinely drip oil when and where needed. Later that year he received a patent for his invention, and requests for it came in from railroad businesses all over the country. Though McCoy’s invention was initially known perjoratively as “nigger oil cups,” soon everyone was asking for “the real McCoy” since attempts to duplicate it were inferior. The invention made it possible for faster railroad deliveries and spurred economic growth in a nation dependent on steam engines. 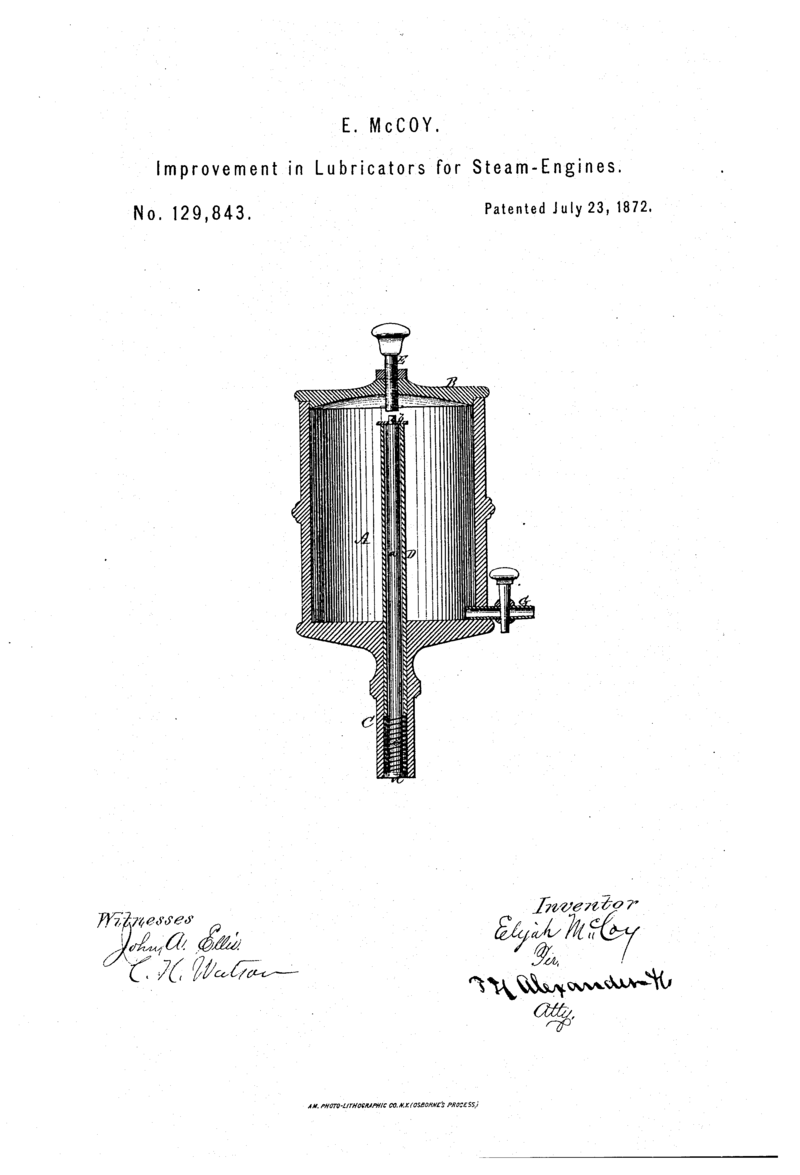 McCoy continued to improve upon his design and invented several more improvements. Michigan Central Railroad promoted him to an instructor in the use of his inventions, and he later became a consultant to the railroad industry on patent matters. McCoy went on to obtain 57 total patents over the course of his lifetime, with a majority of them related to lubrication. The graphite lubricator, used on the cylinders of superheater train engines, is considered his greatest invention due to it’s innovative use of graphite powder as lubricant without the risk of clogging. His other popular inventions include an improved folded ironing table and a lawn sprinkler.

Although McCoy’s achievements were recognized in his own time, his name did not appear on the majority of the products that he devised. McCoy lacked the capital with to manufacture his lubricators in large numbers, so he typically assigned his patent rights to his employers or sold them to investors. In 1920, toward the end of his life, McCoy formed the Elijah McCoy Manufacturing Company to finally produce lubricators bearing his name. Booker T. Washington recognized McCoy as having more patents than any other black inventor at the time. Regardless, many historians fail to recognize McCoy’s importance in revolutionizing the railroad or machine industries with his devices.

Image Courtesy of the Library of Congress

In 1929, McCoy died alone and largely forgotten (his 2nd wife died in 1923). McCoy was unable to make millions for himself, as he had sold many of his patents to others for a fraction of their value. Versions of his original lubricating cup are still used in factories, in mining machinery, in construction equipment, in naval boats, and even in space exploration vehicles. In 1975 the city of Detroit honored his life and work by placing a historic marker at the site of his home and by naming a nearby street Elijah McCoy Drive.

Many people have heard the term “the Real McCoy,” but most people do not know that it originated from Elijah McCoy. Like many African American inventors, he received little credit for his inventions during his time, and his story is rarely told in schools. However, he is notable for providing innovation to the industry he was forced into, and for creating his own success when racial barriers hindered him.