Jesse Owens was a track and field athlete who became the first American in Olympic Track and Field history to win four gold medals in a single Olympiad at the 1936 Berlin Olympics.  This record was unrivaled until Carl Lewis matched Owens’ feat nearly 50 years later at the 1984 Olympic Games in Los Angeles.

The 1936 Olympics were notable, because they were hosted by Adolf Hitler’s Nazi regime with the plan to show the world the power of Aryan supremacy.  However, Jesse Owens’ success both on and off the field displayed heroism that transcended the predominant racist culture of the time.

James Cleveland (J.C.) Owens was born September 12, 1913, the son of a sharecropper and youngest of ten.  When he was nine, the Owens family moved north to Cleveland Ohio in order to escape Jim Crow laws and take advantage of better economic opportunities. There he became known as Jesse when his teacher misheard his nickname “J.C.” as “Jesse.” Jesse quickly learned he had a passion for running, and started track and field in junior high.

Later he would attend Ohio State University, where he was known as the “Buckeye Bullet” and one eight individual NCAA Championships.  One of his greatest achievement happened in 1935, when he set three world records and tied a fourth in a span of 45 minutes during the Big Ten meet at Ferry Field in Michigan: he equaled the world record for the 100 yard dash; and set world records in the long jump; 220-yard sprint; and 220-yard low hurdles.

Nazi propaganda prior to and during the 1936 Berlin Olympics. Image: Iannucci Holocaust History.

After his showing at the Big Ten meet, Jesse Owens was a favorite at the 1936 Berlin Olympics.  When he arrived in Berlin, throngs of fans (mainly young female fans) mobbed him, chanting ,”Wo ist Jesse?”  This was a stark contrast to his travels in the United States, where he and his teammates had to eat and stay at restaurants and hotels that were “black-only.”  Their popularity in Germany was in spite of Adolf Hitler, then Chancellor of the Nazi Party in Germany, who   criticized America for including black athletes on its Olympic roster.  Owens would of course go on to perform remarkably in the olympiad: he captured four gold medals (the 100 meter, the long jump, the 200 meter and the 400-meter relay), and broke two Olympic records (the long jump and the 4 x 100m sprint relay).

Jesse Owens receiving the gold medal in the long jump. He would win four gold medals total in 1936.

Though he was allegedly snubbed by Hitler, Owens received the respect of several other notable Germans.  Just before the competitions, Owens was visited in the Olympic village by German cobbler Adi Dassler.  Dassler, who founded the company Adidas, gave Owens a pair of running shoes.  This gesture was the first sponsorship for a male African-American athlete. 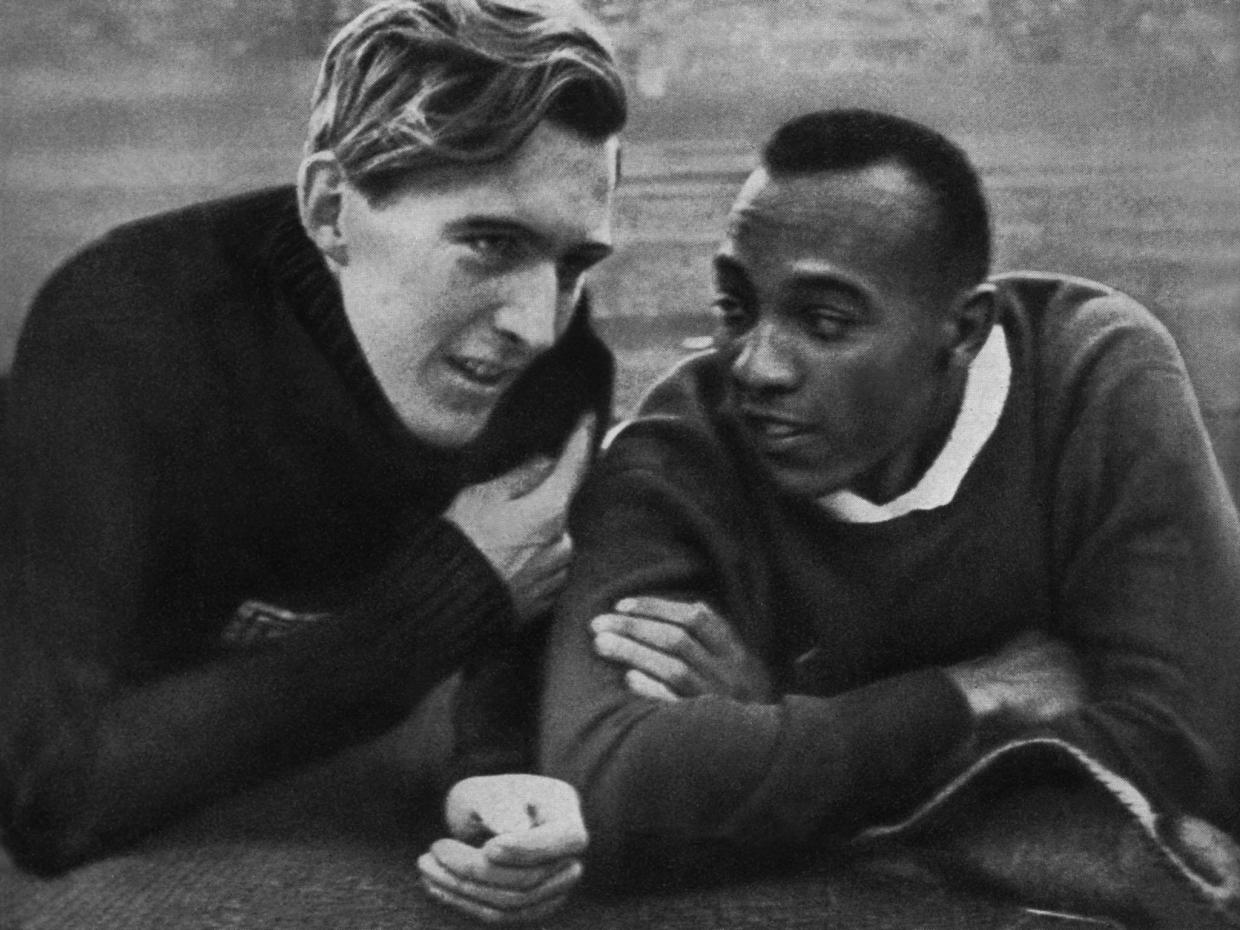 Additionally, Jesse Owens gained the respect and friendship of his Nazi rival Carl Ludwig “Luz” Long.  According to Owens, Luz Long gave Jesse advice that would help him to advance from the qualifying round after Jesse had failed his first two attempts.  This advice would set Owens up to win the gold medal and break the world record later.  After Owens made his final victorious jump, and in an extraordinary show of athletic brotherhood Long was the first to congratulate Owens.  The two even posed together for photos and walked arm-in-arm to the dressing room. Of this moment, Owens said, “It took a lot of courage for him to befriend me in front of Hitler… You can melt down all the medals and cups I have and they wouldn’t be a plating on the twenty-four karat friendship that I felt for Luz Long at that moment.”

Jesse Owens and Luz Long kept in contact via letters after the Olympics.  However, they would never see each other in person again.  Long served in the Wehrmacht during World War II, and was killed in action on July 14, 1943.  Before Long died he sent Owens a final letter, where he asked Owens to contact his son after the war and tell him about his father and “what times were like when we were not separated by war… tell him how things can be between men on this earth.”  After the war, Owens traveled to Germany to meet Kai Long and honor Luz’ last request.  His trip was documented in the 1966 documentary Jesse Owens Returns to Berlin.  Owens even served as Kai Long’s best man at his wedding.

Jesse Owens’ experience while in Germany was far different than it was when he returned to America.  In Germany the hotels were not segregated, so white and black athletes stayed and trained together.  Furthermore, Owens athletic prowess made him very popular among the German people.  Despite helping the U.S. to win 11 gold medals at the games, his return home was not met with a champion’s respect.  President Franklin D. Roosevelt failed to meet with Owens and congratulate him, a broken standard during a time when champions were typically invited to the White House.  At a rally in 1936, Owens said, “Hitler didn’t snub me — it was our president who snubbed me. The president didn’t even send me a telegram.”  Additionally, Owens still couldn’t ride in the front of the bus or live where he wanted in his native country. He wouldn’t be properly recognized by America until 1976, when President Gerald Ford awarded him the Presidential Medal of Freedom.

“The battles that count aren’t the ones for gold medals. The struggles within yourself—the invisible, inevitable battles inside all of us—that’s where it’s at.” —Jesse Owens. Credit: Jesse Owens trust.

Jesse Owens story is one of triumph, but it’s astounding that he faced more racism in his own country than he did in Nazi Germany.  Especially touching was the friendship he was able to make with Lutz Long, when the latter had everything to lose by both helping and congratulating his rival.  These men, bound by shared sport, transcended cultural norms to respect one another.

Another Travelbox History Corner will be posted later today, since I fell behind.  Stay tuned!