Throughout history, it has proven obvious that men of considerable physical prowess and charisma would be celebrated. This is especially true in America, but with respect to men of color the caveat is that they would also become as hated as they were loved. This would hold true for athletes such as O.J. Simpson, Mike Tyson, and Richard Sherman. However, the first in this legacy would be the Galveston Giant; documentarian Ken Burns noted that “for more than thirteen years, Jack Johnson was the most famous and the most notorious African-American on Earth.”

John Arthur “Jack” Johnson was born on March 31, 1878, in Galveston, Texas. Though he was the son of ex-slaves and the third of nine children, Johnson was naturally confident and ambitious. Galveston, being a very poor area was not segregated racially. Johnson hung around with a “gang of white boys” and was never taught that race made one superior to another. This mentality would carry through to his adult life and career. Johnson quit school early out of necessity to work, but his general distaste for labor fueled his desire to become a fighter. Eventually he made his way to Manhattan, where he would work at a gym and save up for his first pair of boxing gloves. During this time, Johnson developed his fighting style and sparred often.

When Johnson returned to Galveston he made his debut as a professional boxer and won with a knockout. He had several professional bouts, but in 1901 a fight against Joe Choynski would end with both fighters in jail (prizefighting was technically illegal in Texas). While in prison Choynski saw potential in Johnson and became his mentor, developing Johnson into a championship contender.. In 1903, he won his first title–the World Colored Heavyweight Championship—by beating Denver Ed Martin in a 20-round match. Over the next five years, Johnson defended his title numerous times. Though he was the World Heavyweight Colored Champion, he was not given the opportunity to fight for the official Heavyweight Championship (because racism). Although black and white fighters would compete against each other on occasion, undefeated former champion James Jeffries and his successor Tommy Burns would not agree to a bout. This would change in 1908, when Tommy Burns agreed to fight Jack Johnson in Australia on Boxing Day after Johnson taunted the champ for several years and Australian promoters guaranteed Burns $30k to fight. After fourteen rounds, Johnson won over Burns on a referee’s decision.

Johnson’s win made him the first African-American World Heavyweight Champion. Johnson would defend his title for the next two years against both in-ring contenders and against racial animosity from a white public that hated him because of his skin color. The challengers who would face him were billed by promoters as the “great white hope” that would topple Johnson. But none would be able to overcome Johnson’s might and skill. Johnson, for his part, did little to avoid their animosity. Johnson loved fast cars and easy women. He gambled recklessly, bought lavish furs and outfits and even committed the grossest of crimes by having relations with white women (which was particularly offensive to white spectators). 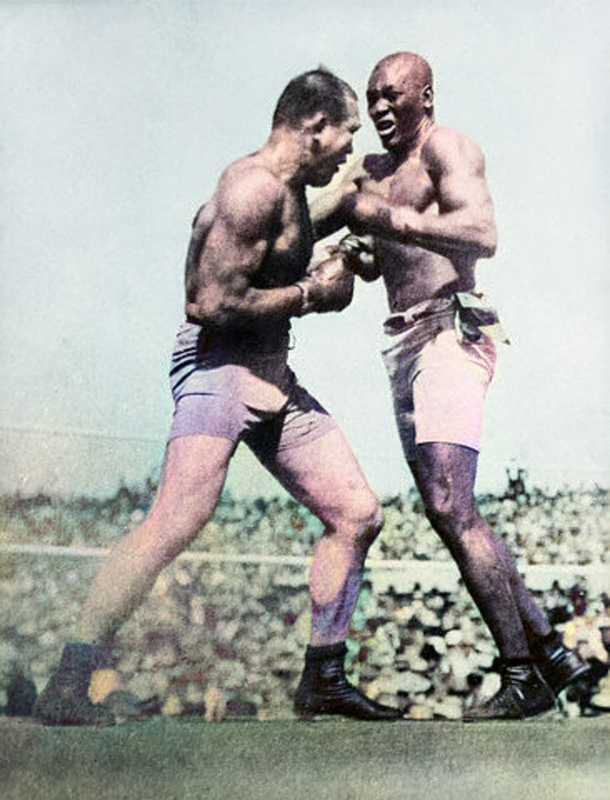 in 1910 the former undefeated heavyweight champion James Jeffries came out of retirement to challenge Johnson. He was motivated by a hefty purse of $120k and interested parties who wanted nothing more to see the defeat of the black Champion. Prior to the fight racial tension was high, and guns were prohibited within the arena as was the sale of alcohol or anyone under the effects of alcohol. Despite promoters giving odds to Jeffries for what was dubbed the “Fight of the Century,” Johnson decisively whooped that ass. Afterwards, Jeffries was humbled by the loss and what he’d seen of Johnson in their match. “I could never have whipped Johnson at my best”, Jeffries said. “I couldn’t have hit him. No, I couldn’t have reached him in 1,000 years.” The aftermath of the fight was race riots; white citizens from Texas to New York felt humiliated by Jeffries’ defeat. In response to African American jubilation, as many as 26 black people would be killed by lynch mobs. Film of the fight was banned from being shown in most cities, and even President Teddy Roosevelt spoke out against the film’s exhibition due to the racial animosity it sparked.

“The last hope of the white race had failed, since that day no other has been found to try to replace him.”

Johnson remained champion for the next five years. During this time he acted the part of the celebrity, and even denied fights to black challengers since he could make more money fighting white contenders. During this time, he endorsed various products, and engaged in automobile racing. Johnson was married several times to Caucasian women, and he showered his wives with expensive jewelry and furs. Once, when pulled over for a $50 speeding ticket he gave the officer a $100 bill and told him to keep the change since he would be making his return trip at the same speed. He even opened a night club in Harlem that would eventually be known as the famous Cotton Club under new ownership.

Haters back off! (Photo by Chicago History Museum/Getty Images)

Johnson would eventually lose his title in 1915 against Jess Willard after being forced into political exile after being charged under the Mann act, an act which prohibited the transporting of women over state lines for “immoral purposes.”  In actuality, the charges were trumped up by white racists in order to take Johnson down.  In 1946 he died in a car crash, speeding away from a diner that refused him service on account of his race. In 2004, Ken Burns produced a 220 minute documentary titled Unforgivable Blackness (which included the talents of Keith David, Samuel L. Jackson, and Alan Rickman). James Earl Jones would also star in The Great White Hope, the stage and film adaptations of Johnson’s life. Johnson was inducted into the Boxing Hall of Fame in 1954, and in 2012 the City of Galveston dedicated a park in Johnson’s memory along with a life-size, bronze statue of Johnson. Linda E. Haywood, the great-niece of boxing legend Jack Johnson, with the life-size statue of the boxer at the dedication of the John Arthur “Jack” Johnson Park in Galveston, Texas. (AP Photo/The Daily News, Jennifer Reynolds)