Rarely do stories of the Wild West and cowboys involve people of color, aside from indigenous Americans who were either targets or passive companions.  However, in the 1800s there were plenty of African Americans in the Wild West.  Among these unsung pioneers was a man who by all accounts was the greatest law man in the west.  Bass Reeves was a U.S. Deputy Marshal in the Oklahoma territory who arrested more than 3000 men in his 32 years of service.  Reeves was feared and respected throughout the Wild west, and his legend was thought to have inspired stories such as the Lone Ranger and Django Unchained.

Bass Reeves was born in 1838 in Texas as the slave of William Reeves.  During the American Civil War Reeves’ son George became a colonel in the confederate army, accompanied by Bass as his personal companion.  According to most sources, Bass Reeves emancipated himself during the Civil War.  Apparently Bass beat up his soon to be former master after a dispute during cards, whereafter he proclaimed himself to be free and fled to the Indian country.

Reeves would end up near the Oklahoma Territory where he lived among the Creek and Seminole tribes.  While among them he learned native customs and to speak five Native American languages fluently.  Bass Reeves would become proficient as a territorial scout, learning to ride horseback and track prey and humans.  In addition to this, Bass honed his skill with both pistols and firearms, becoming a quick and accurate marksmen.  These skills would end up being very useful to him in his eventual career.

After slavery was abolished and the war came to an end and Reeves was no longer a fugitive.  He left Indian Territory and bought land near Van Buren, Arkansas, where he became one of the first black settlers.  Reeves became a successful farmer and rancher, as well as as an occasional scout for lawmen tracking criminals.  A year after settling down, he married Nellie Jennie from Texas, and set about raising five girls and five boys on their Arkansas farm.

Reeves and his family lived a relatively quiet life until 1875, when Reeves was called upon by U.S. Marshal James Fagan to become a Deputy Marshal.  Fagan was appointed by the Federal Judge Isaac Parker and given the task to hire 200 deputies to patrol the nearly 75,000 square miles of the Indian Territory.  Because the Indian Territory was not under any federal jurisdiction prior to this, thieves, murderers, and anyone else wishing to hide from the law took refuge there.  The Deputy Marshals were tasked with cleaning up the Indian Territory, which meant brining in criminals dead or alive. At 38 years old, Bass Reeves was larger than most men at 6’2″ and nearly 200 pounds of muscle.  He was broad at the shoulders, narrow at the hips, and said to possess superhuman strength. The first black lawman west of the Mississippi was known for his trademark black hat, large gray horse, and twin .45 Colt Peacemakers that he would Reeves cut a striking figure on his large gray (almost white) horse, while wearing his trademark black hat and twin .45 Colt Peacemakers.  He gave out silver dollars as his calling card.

Reeves was ambidextrous, and would draw his guns from across his hips with lightning speed and deadly accuracy.  It was said he could whip any two men with his bare hands, and that he always get his man no matter the circumstance.  Reeves himself said the largest number of outlaws he ever caught at one time was nineteen horse thieves, captured near Fort Sill, Oklahoma.  During his tenure, Reeves killed 14 outlaws in self-defense but was never wounded himself. 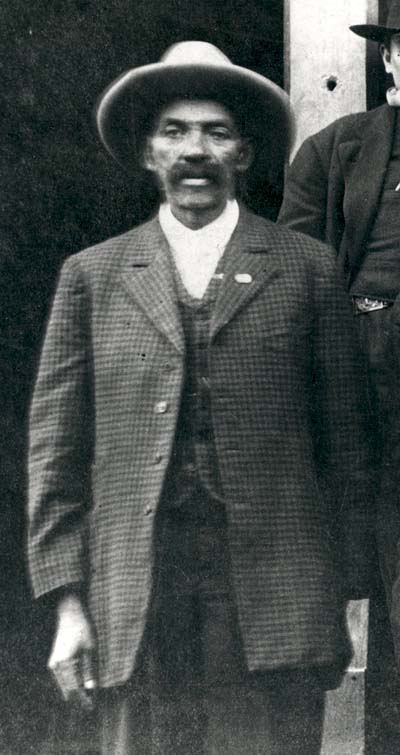 In addition to being imposing and nearly invincible, Reeves was known for his cunning and detective skills.  At times he would employ disguises to capture his prey.  In one instance, he dressed up as a vagrant to trick two criminals he was tracking into letting him take refuge with them.  While they slept, he handcuffed them and brought them to justice.  Another time, when three criminals got the drop on him, he calmly distracted them by asking for the date for his arrest paperwork.  When the three men laughed, thinking they were about to kill Bass, he used his blazing speed and ferocious strength to overcome the outlaws.  He killed two and arrested the third (who wisely surrendered).

Bass Reeves was doggedly relentless in his pursuit of criminals.  His reputation was such that the famous outlaw Belle Star turned herself in after hearing that Reeves had a warrant to arrest her for horse theft.  In 1902 he arrested his own son, Benny, for murdering his wife.  Reeves demanded the warrant, while the other deputies refused to take the job, and Reeves brought his son back to stand trial.  Benny ended up serving twenty years at Leavenworth Prison after being tried, and a after citizen’s petition and an exemplary prison record, he was pardoned and lived the rest of his life as a model citizen.

When Oklahoma became a state in 1907, Reeves’ commission as marshal ended.  At 68 years of age he was the last and longest serving of Judge Parker’s Marshals.  During his career he served over 3000 arrest warrants, and had the reputation of never making a mistake while doing so, despite his inability to read or write.  After leaving the Marshals, he became a patrolman with the Muskogee Oklahoma Police Department.  During the two years that he served in this capacity, there were reportedly no crimes on his beat. Reeves retired in 1909 due to ill health, and died in 1910 from Bright’s disease.  The lengthy and glowing obituary for this universally respected former slave turned U.S. Deputy Marshal described him as “absolutely fearless and knowing no master but duty.” 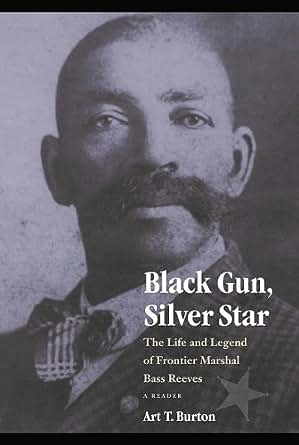 According to historian Art Burton, “If Reeves were fictional, he would be a combination of Sherlock Holmes, Superman, and the Lone Ranger.”  Indeed, Reeves legend has been argued to be the basis of the now classic radio and later television series “The Lone Ranger” due to several key similarities between the character and the real marshal.  Whether this is true or not, Reeves actual story overshadows the fictional Lone Ranger, as well as real cowboys such as Wyatt Earp and Wild Bill Hickcock.  While largely ignored by Hollywood and in American History, many stories of Reeves’ accomplishments can be found in Art Burton’s book Black Gun, Silver Star: The Life and Legend of Frontier Marshal Bass Reeves.

In 2011, the bridge that connects Muskogee and Fort Gibson in Oklanahoma was named the Bass Reeves Memorial Bridge.  Furthermore, a bronze statue depicting Reeves on a horse riding west was dedicated in Fort Smith’s Pendergraft Parkin 2012. The statue cost more than $300,000, was paid for by donations to the Bass Reeves Legacy Initiative.

Tune in tomorrow for more Travelbox History Corner. You can check out our Black History Month series here.